"Kitakyushu: The City Where I Live"
Kuroda Seitaro, Illustrator

Born in Osaka, Mr. Kuroda Seitaro, an illustrator who has been living in Mojiko, Kitakyushu since 2009, and who has spent many years overseas in New York and elsewhere, talks in detail from the unique perspective of an artist about the attractive points of Kitakyushu, which he has chosen as a base for his work.

Born in Osaka, Mr. Kuroda Seitaro, an illustrator who has been living in Mojiko, Kitakyushu since 2009, and who has spent many years overseas in New York and elsewhere, talks in detail from the unique perspective of an artist about the attractive points of Kitakyushu, which he has chosen as a base for his work.

My recommended travel route for visitors to enjoy what Kitakyushu has to offer is to take a local train from Mojiko Station to Orio. Transfer trains and go to Wakamatsu Station, and cross from Wakamatsu to Tobata by ferry. This is the best travel route.

If you sit on the right side of the train on this course, the sea will be visible the entire time. The route passes by the Kanmon Straits and around Dokai Bay. If you sit on the opposite left side of the train, the mountains will be visible the entire time. While they may not be a remarkable tourist spot, the mountains and the sea offers its own charm with a slightly different feeling. The people who get on and off the trains along the way are very human. At the extreme opposite end of the spectrum are the city's factories, and I find this contrast interesting. This, combined with Kitakyushu's natural environment, is something that really captures the eye. 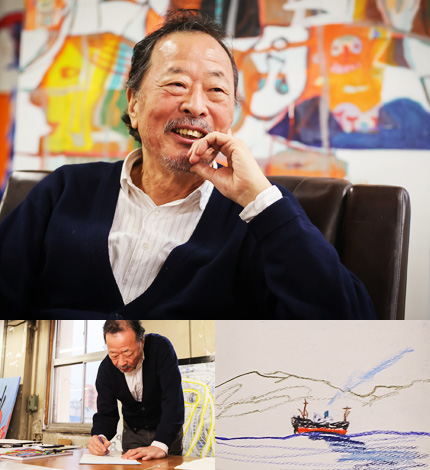 Even though it is this narrow, the Kanmon Straits connects the Pacific Ocean and the Sea of Japan. When Korean people see the straits, they jokingly remark and say that this is "narrower than the Han River". I think the very first person who came to the Straits must have been pretty scared. Long after that was the well-known Battle of Dannoura in the 12 century. Really amazing. While imagining these things, I can think that it must always have been fascinating to witness. For me, the charm and interesting points of Kitakyushu are, in any case, its people. If the people are fascinating, isn't the landscape of the place where they live also fascinating? You can have all kinds of encounters riding on the train or even just strolling around town.

One day after I started living in Mojiko, I was walking around eating takoyaki (octopus dumplings) and a man I didn't know jokingly said, "Aren't you a famous painter? People like you aren't supposed to eat while you're walking!". I became mesmerized. What a great place! No one would ever say anything like that in Tokyo. There is a special kind of charm in a place like this. After all, even as the city flourished because of its coal, iron and steel, its history was one where it was abandoned as the times changed. The people however bounced back strongly and the city still retains an old-fashioned sentiment. I think that is something that I would like the younger generation to see. Unlike Tokyo, I think that being able to feel the character of the people in a city gives a sense of what a "city" is. It is not always the large number of households or high-rise buildings that makes a place a "city."

I came here, to this place without any ties or connections, just on intuition alone. 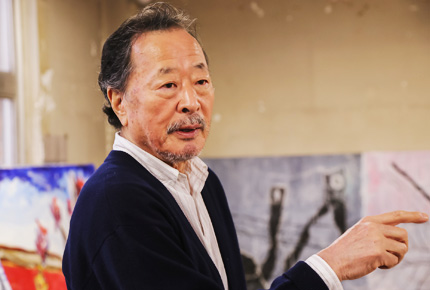 When I lived in New York, I came to Kokura once for work. At that time, I visited a sushi place called Koyama and became very fond of it. After that whenever I came back to Japan, I went all the way down to Kitakyushu to visit Koyama. After drinking I would sobered up in a hotel pool and then went back to Koyama. Koyama for me was the embodiment of all that Kokura had to offer. So, when I thought about where I wanted to live, I thought, "Why not go to Kokura?" And, so I sent one trunk to a home of a young man that I met at a bar, and came to Kitakyushu.

Now that I had landed in Kitakyushu, it was time for the city to test me out. Whether I made the right choice to be in this city.

As I went out drinking every night, I started to like the counter at a bar called nagaya where I drew pictures. If there's a guy you've never seen nor met before drawing pictures at the counter of a bar, wouldn't you want to come up and talk to him? I met a lot of people there who eventually asked why don't I draw pictures of the Kitakyushu Performing Arts Center and Kitakyushu Airport, and so I rented a place in Mojiko as a studio. Kitakyushu is pretty amazing. This all came about just because I was drawing pictures at the counter of a bar. It's fascinating.

I don't really want to use the saying that "people are kind," however, the "people" are fascinating. This connection no longer exists in Tokyo. It is because of this connection that I have lived here so long, and now, when I come back to Kitakyushu, I feel at ease. Really. However, if someone asks me, "Are you really going to stay there for good?" I'm not sure. (laughs). 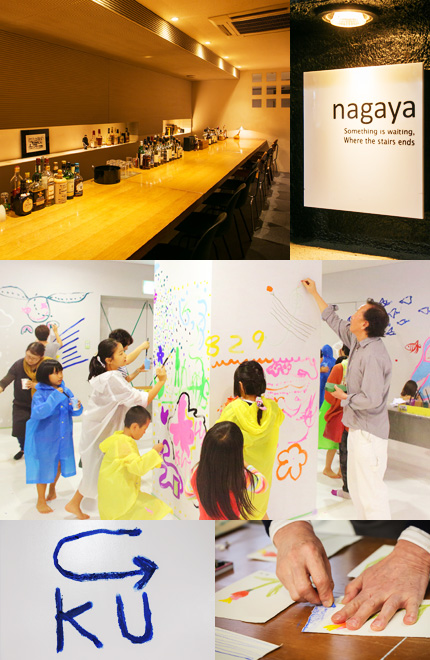 When the designer Morita Yasumichi came to see me in my studio, he asked "Is this is?" when he saw the outer wall of Mojiko Station that was being repaired for conservation. At that time, I thought, "I feel sorry for the people who come from all over to see Mojiko Station and all they can see is a wall that is under construction." This was the start of Mr. Morita and I talking about what we could do here.

Mr. Morita said, "Let's draw some pictures." Since we are in Kitakyushu, I thought I would have the octopus of the Kanmon Straits make an appearance, and so I drew octopuses. Later on, I drew pictures with children on the left side facing the station. And you know what? It was pretty good. I thought that I would call the children back to draw pictures of octopuses together to put on the walls once it became spring. It shouldn't just remain the same. Since we planted the seed, we had to give the idea some water so that it would sprout. Isn't it better to lead to something? 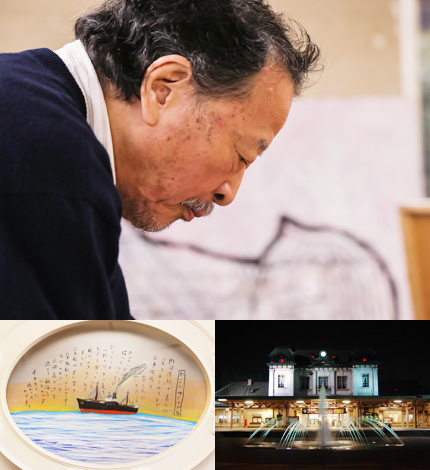 By doing something with people, I think that a type of "Kitakyushu character" full of humanity will appear. The city is helping and local residents are also offering their support for this. If I had to choose, I would want to turn Kitakyushu into a "city full of art." Although I don't want to use the word "art."

Places introduced in this interview